We may have received some of the products mentioned below free for review purposes. Some of our posts may contain affiliate links. All opinions are exclusive to Create. Play. Travel.

I’m excited to share a little about our adventures in London! During our week in the city, we saw many iconic buildings and landmarks. We also witnessed some of the memorial events honoring the passing of Queen Elizabeth II. This trip was our family’s first experience traveling internationally.

In fall 2022, our family decided to go on a month-long trip to the United Kingdom and surrounding areas. Our plans came together fairly last minute. My husband, Andy, eagerly used his adventure-planning superpowers to arrange housing for our family. He came up with a packed itinerary of memorable destinations. We flew into Heathrow Airport in London and explored the city for a few days. Then we rented a car, and drove through Wales into Edinburgh, Scotland. Next, we planned to visit Dublin, Ireland and complete our circuit by coming back to London. 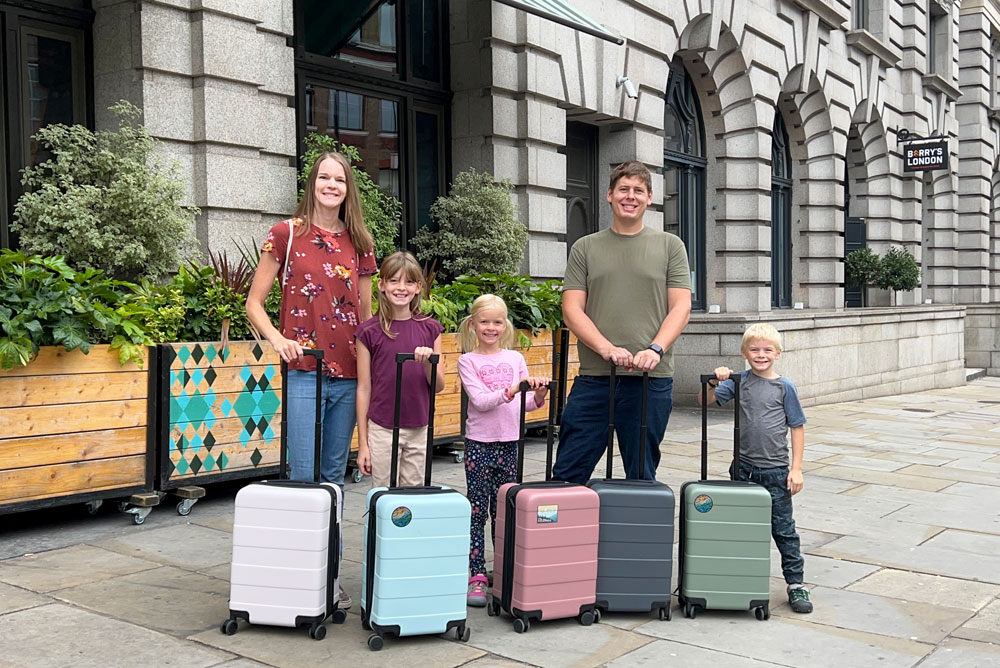 We couldn’t have anticipated that Queen Elizabeth II would pass away just days before we left on our trip. Because of her death, our adventure in London in September was quite different than what we ordinarily would have experienced. Of course, we felt honored to witness some of the local memorial events.

Family Trip to the UK Video 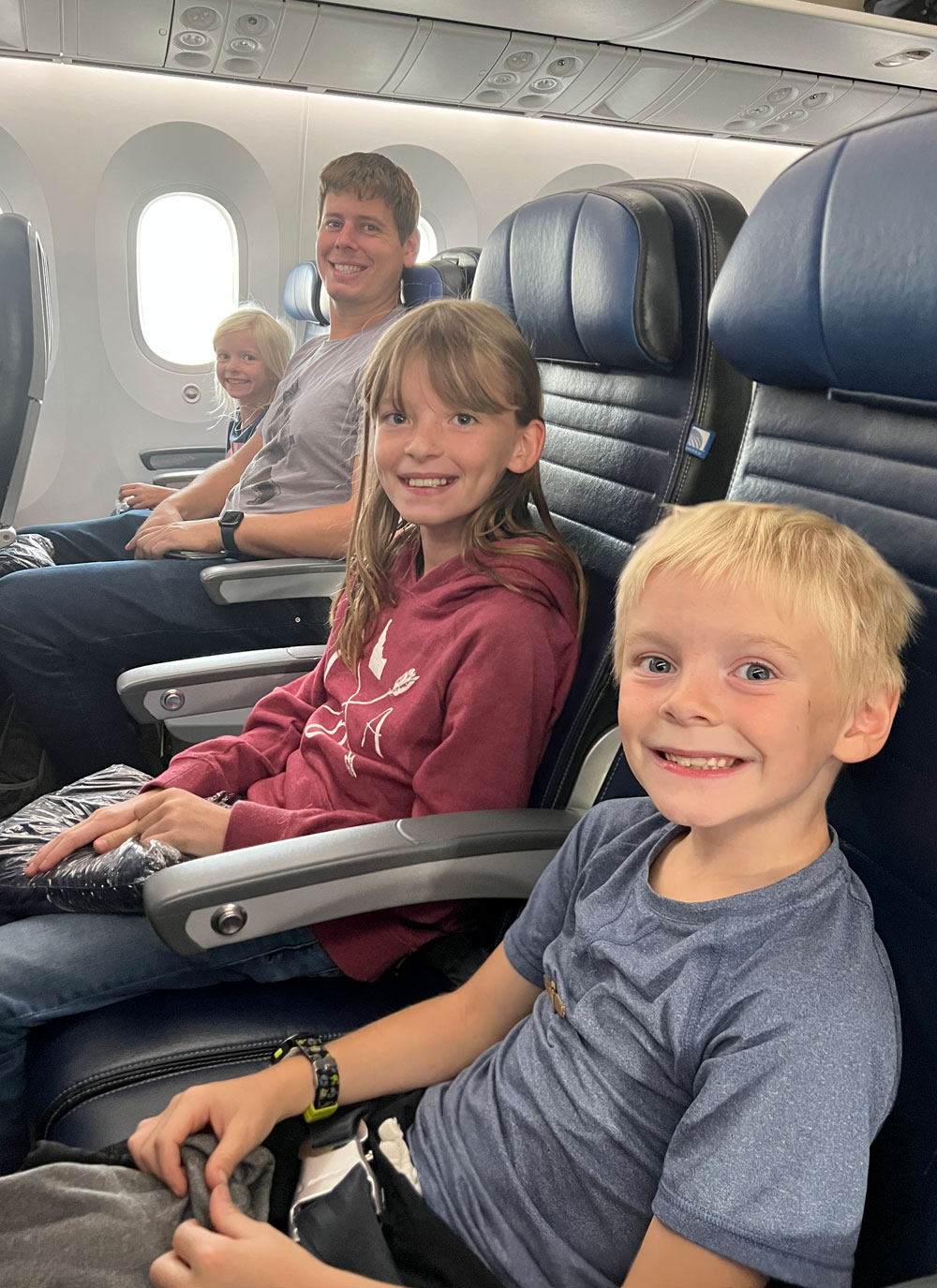 Our kids first international flight went very well. Onboard the big 787 airplane, we found our seats and settled in for our 9-hour flight. The kids were happy to watch a movie on the flight and sample their on-board airplane food. Eventually the kids nodded off and slept for a few hours. Andy and I tried to get a bit of sleep but it was challenging to feel restful while sitting upright and feeling a bit crowded. We had left Idaho at 11:30 am, with a layover in Denver and counting a 7-hour time difference, we finally arrived in London at 9 am. This felt a bit disorienting, and we should have checked into our hotel and gone right to sleep. However, we decided to go into the city to try to get a glimpse of the Queen’s military procession that was scheduled for that afternoon. 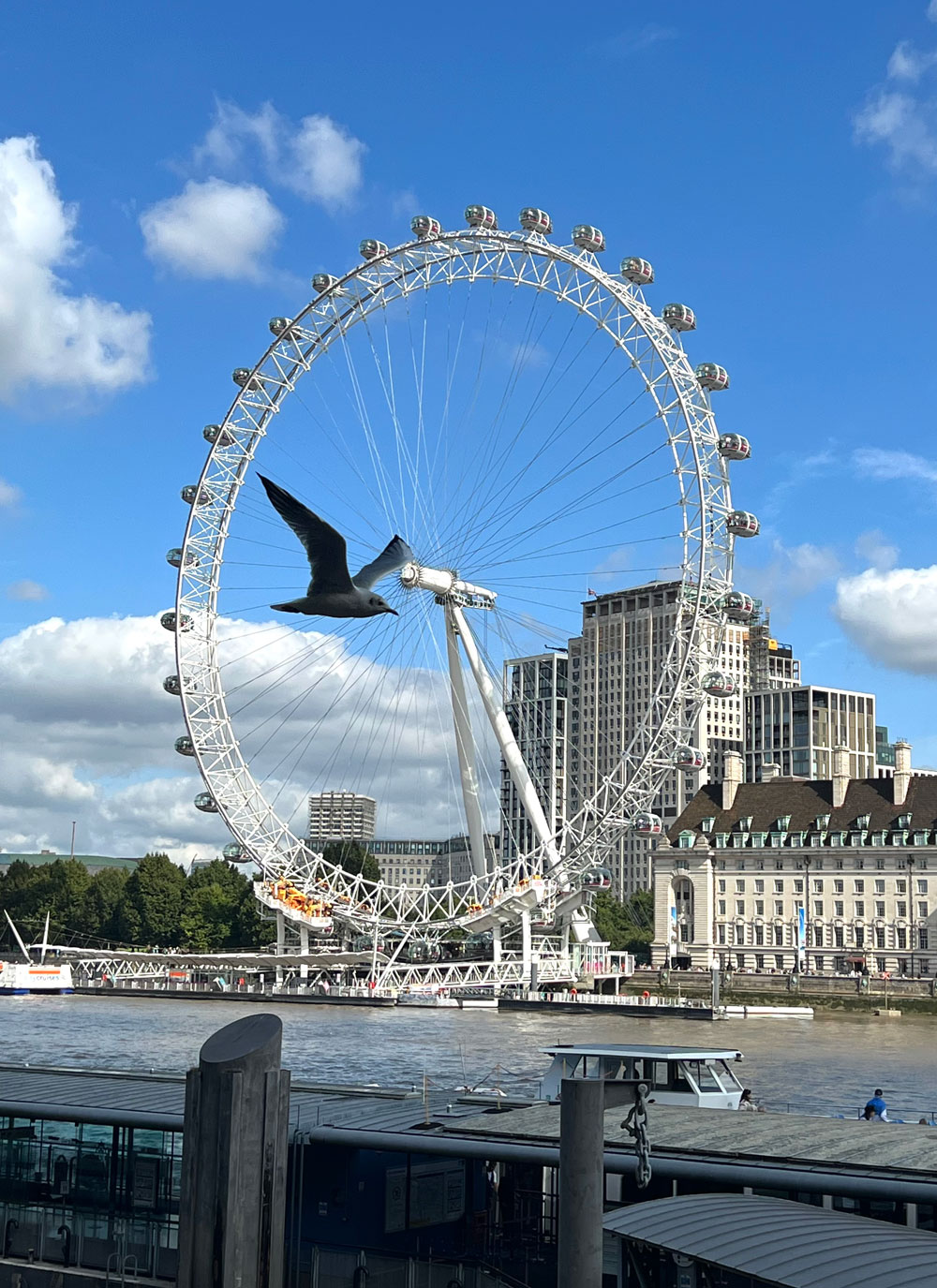 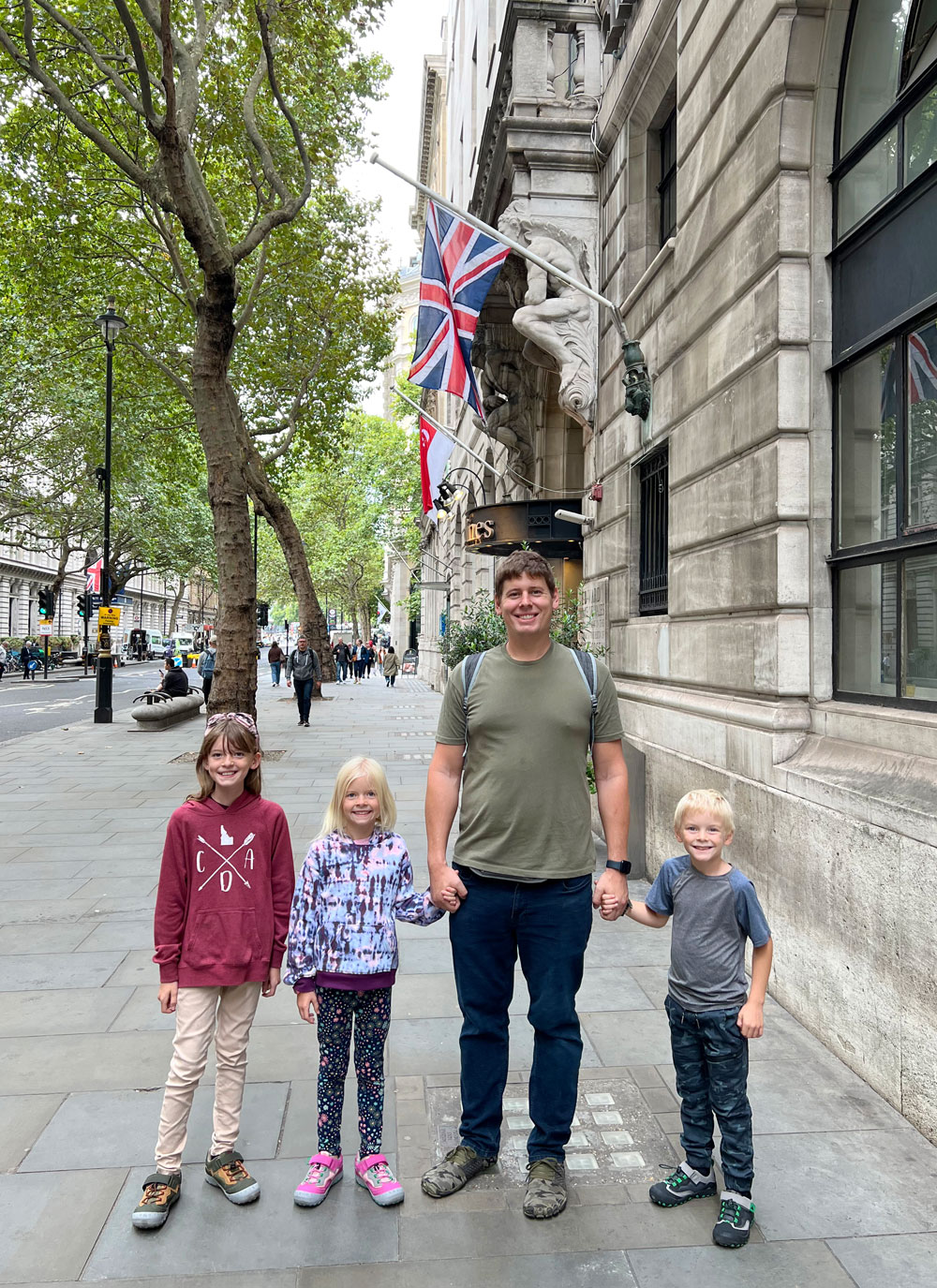 Once we dropped off our suitcases at the hotel, we took a train to Central London. The station let us out with a great view of the London Eye cantilevered observation wheel, and very close to Big Ben and Westminster Abbey. We couldn’t see the military procession directly, due to the crowds of people and some crowd control barriers. However, we saw some live video on our phones. We also heard Big Ben chime at 4 o’clock, which was special because the tower has been under renovation since 2017. Evidently, Big Ben was unveiled early for the Queen’s memorial proceedings. 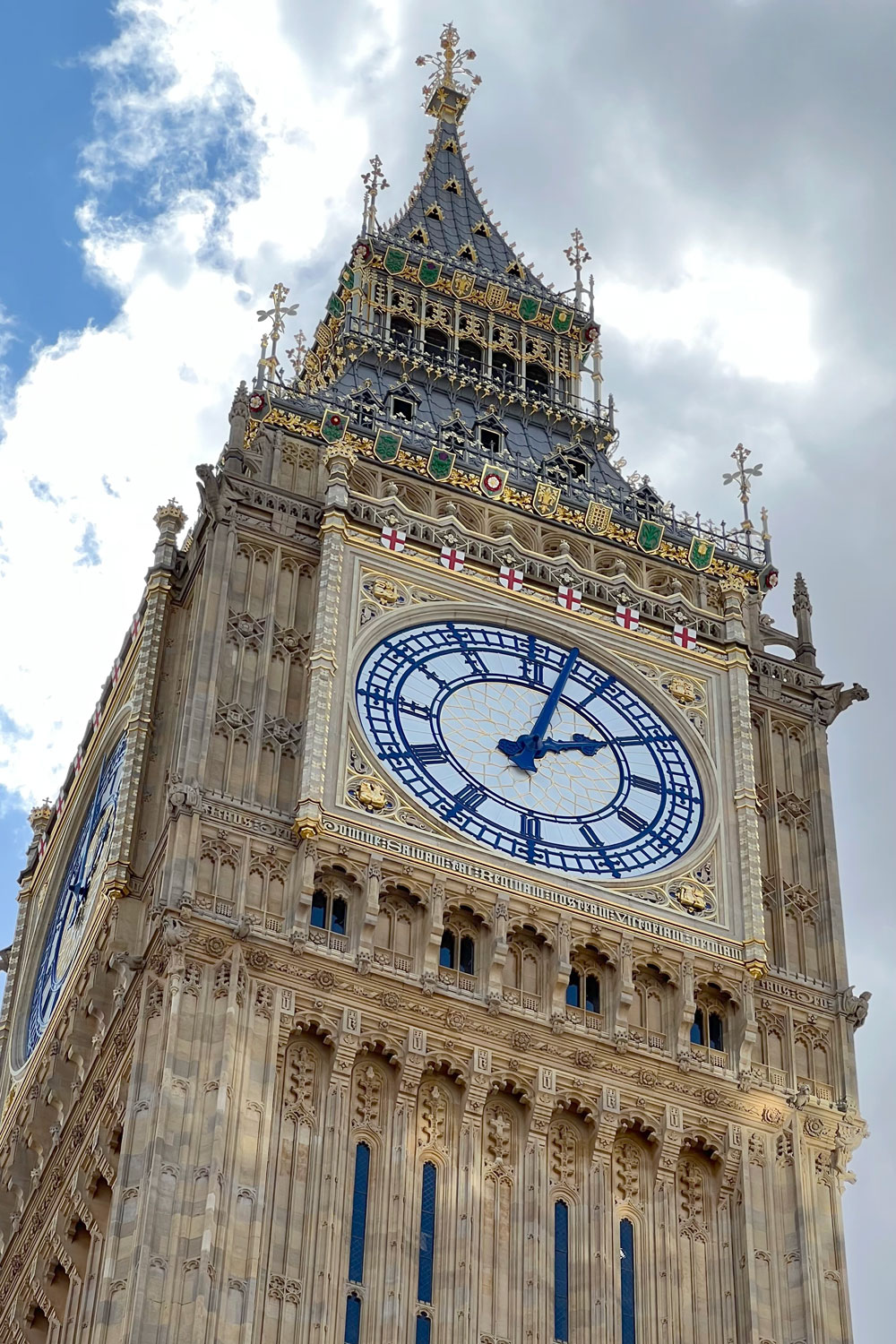 After our first few hours in London, we tried to get a full night’s sleep at our hotel. Jet Lag is a strange thing, because we knew it was daylight hours back home. Yet we had been awake for most of the previous 24 hours. 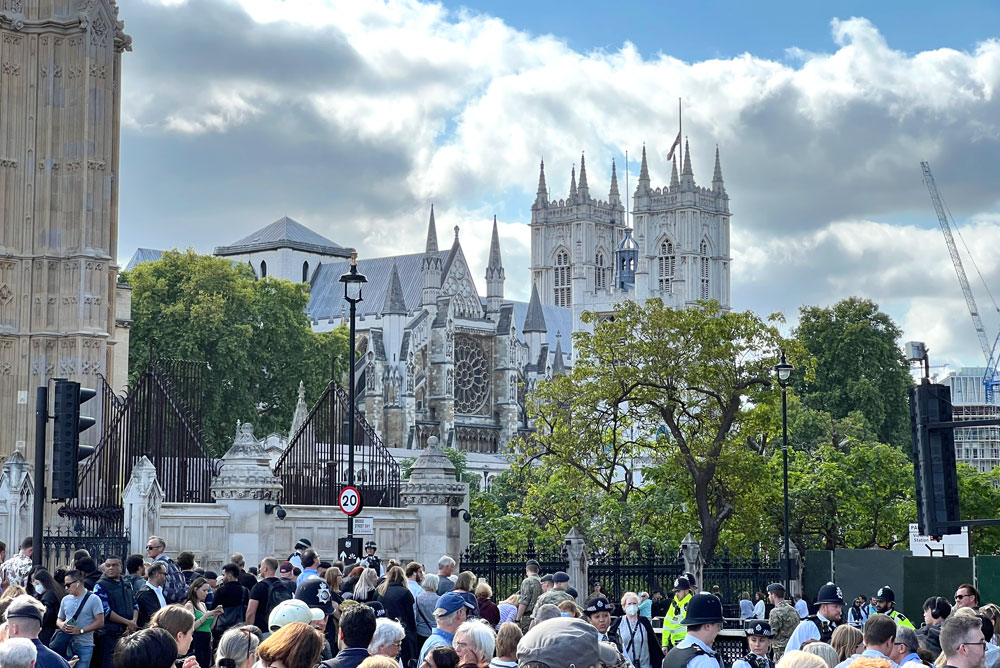 Over the following few days we explored London, despite crowds of people. We stopped by the National Gallery and saw original paintings by Monet and Picasso, among others. We took a double decker bus to a station near Buckingham Palace. There we joined a queue of people which led us to the palace gates, and further on to Green Park.

At Green Park we saw an extensive memorial of flowers that people had left in memory of Queen Elizabeth II. Also, people had left notes, cards and hand-drawn pictures. I realize that as Americans, we can’t fully experience the sentiment many of the British people have for Her Majesty the Queen. However, it was inspiring to see the Green Park memorial flowers in person. This was definitely one of the highlights of my experience in London. 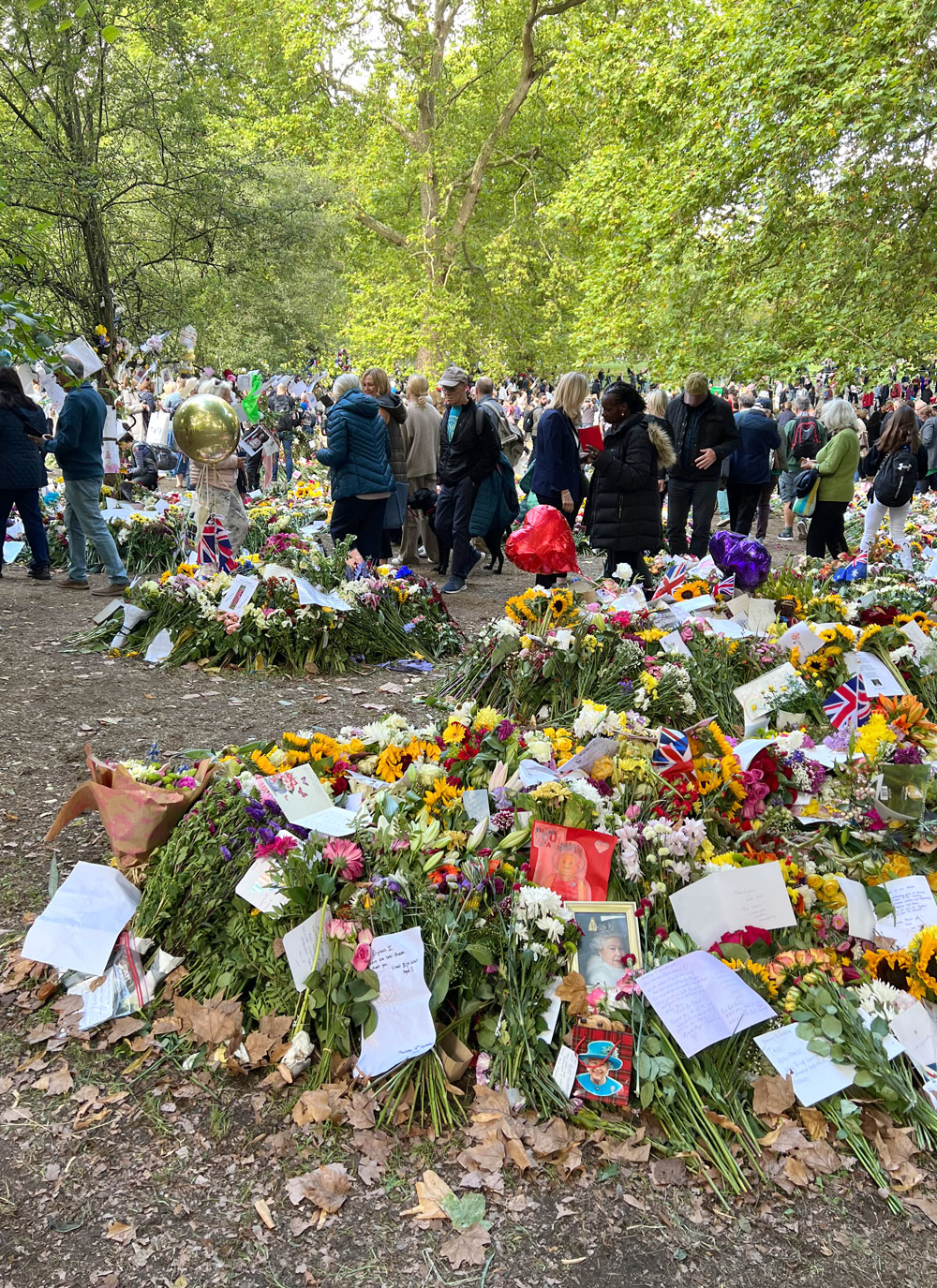 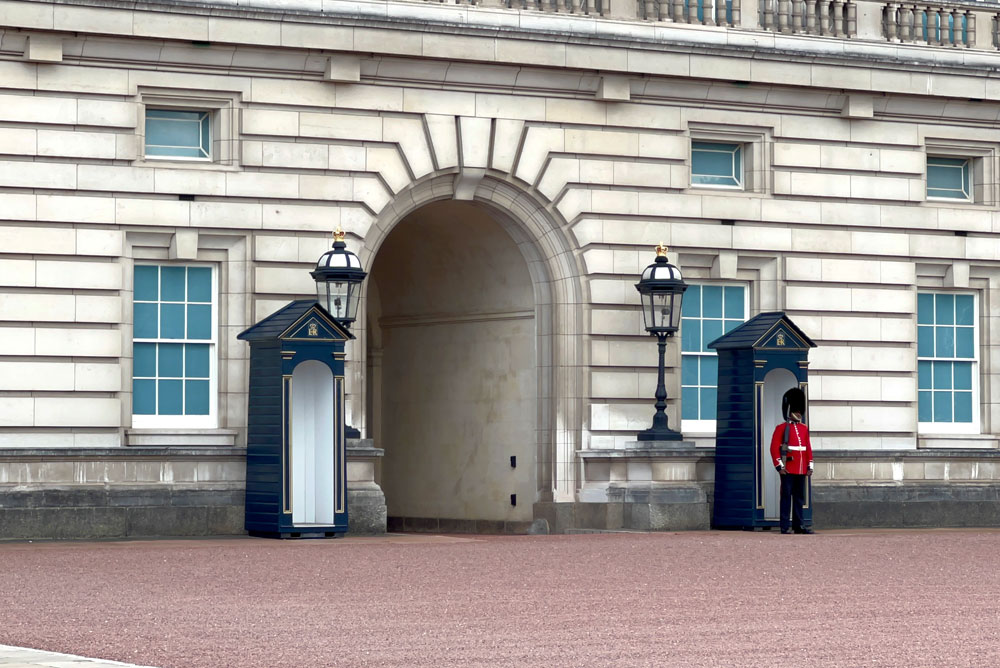 Guard in front of Buckingham Palace in London. 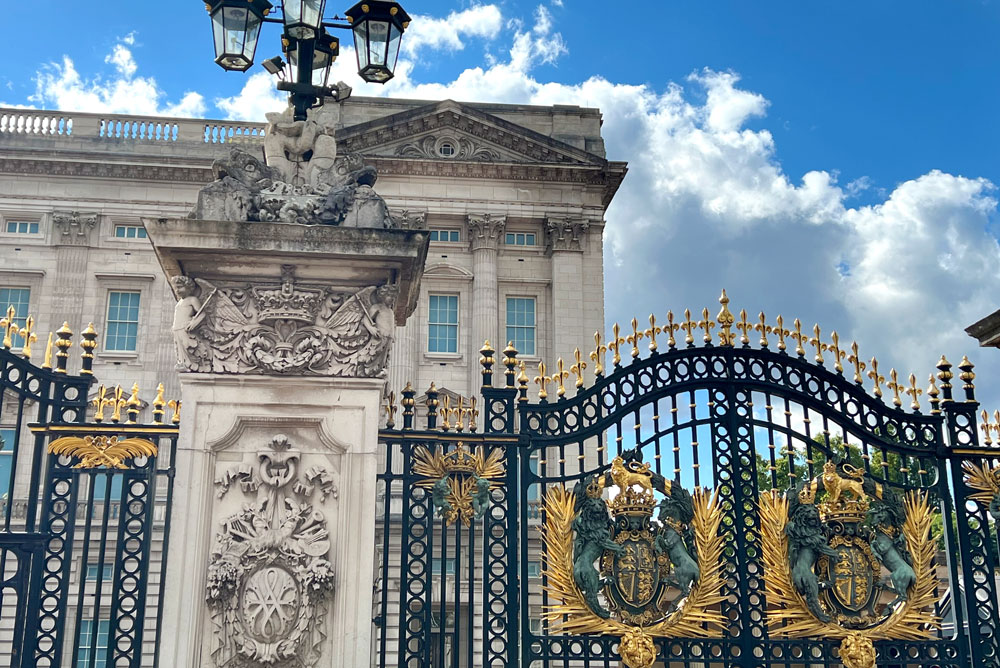 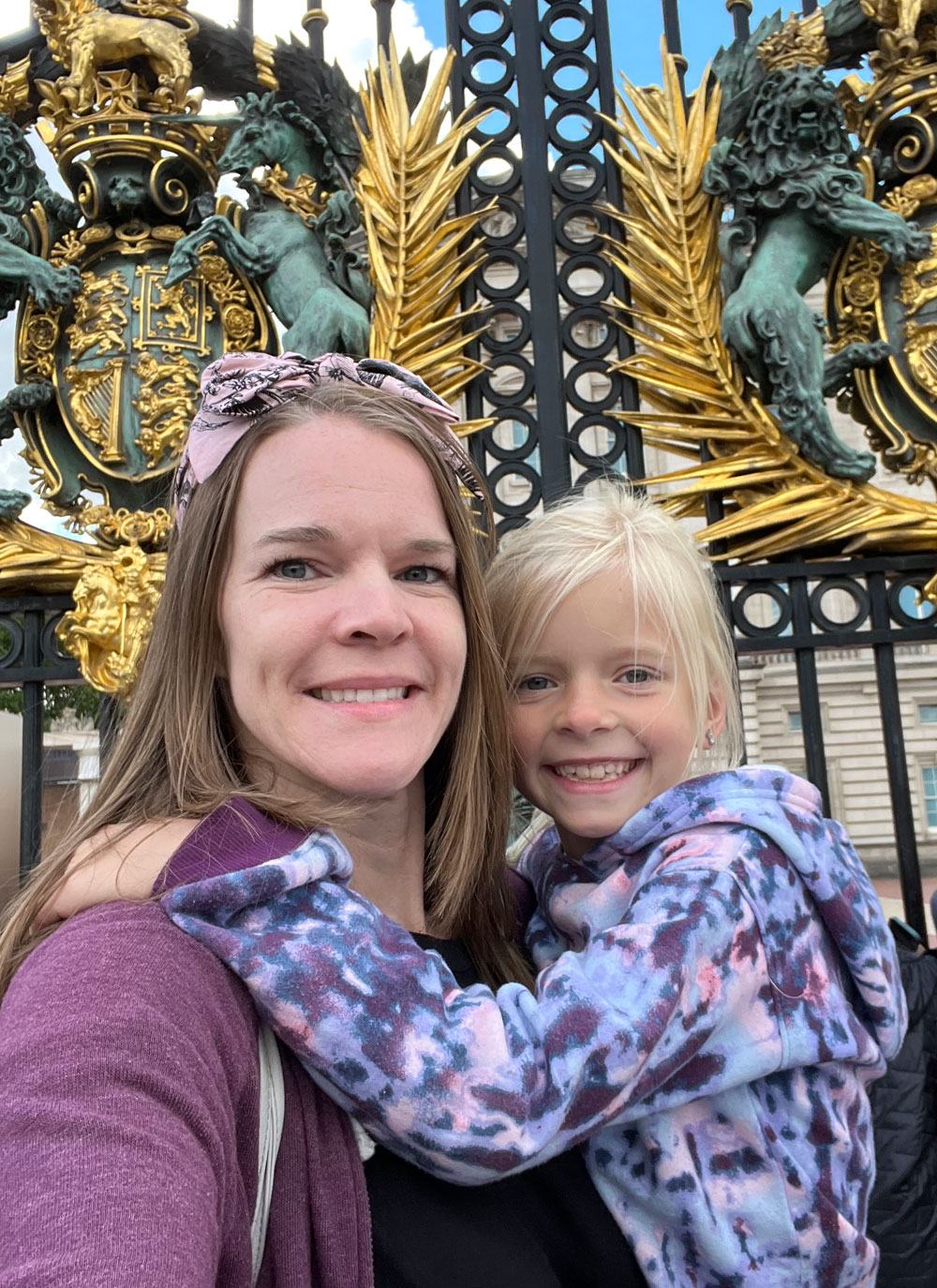 We also saw the people who stood in a queue that stretched 5 miles long, through downtown London and across the river. They waited for their turn to see the Queen’s coffin Lying-in-State at Westminster Hall. The news reported some people waited in the queue for 14 hours to reach the hall. I took this photo across the River Thames, pretty close to the London Eye cantilevered observation wheel. 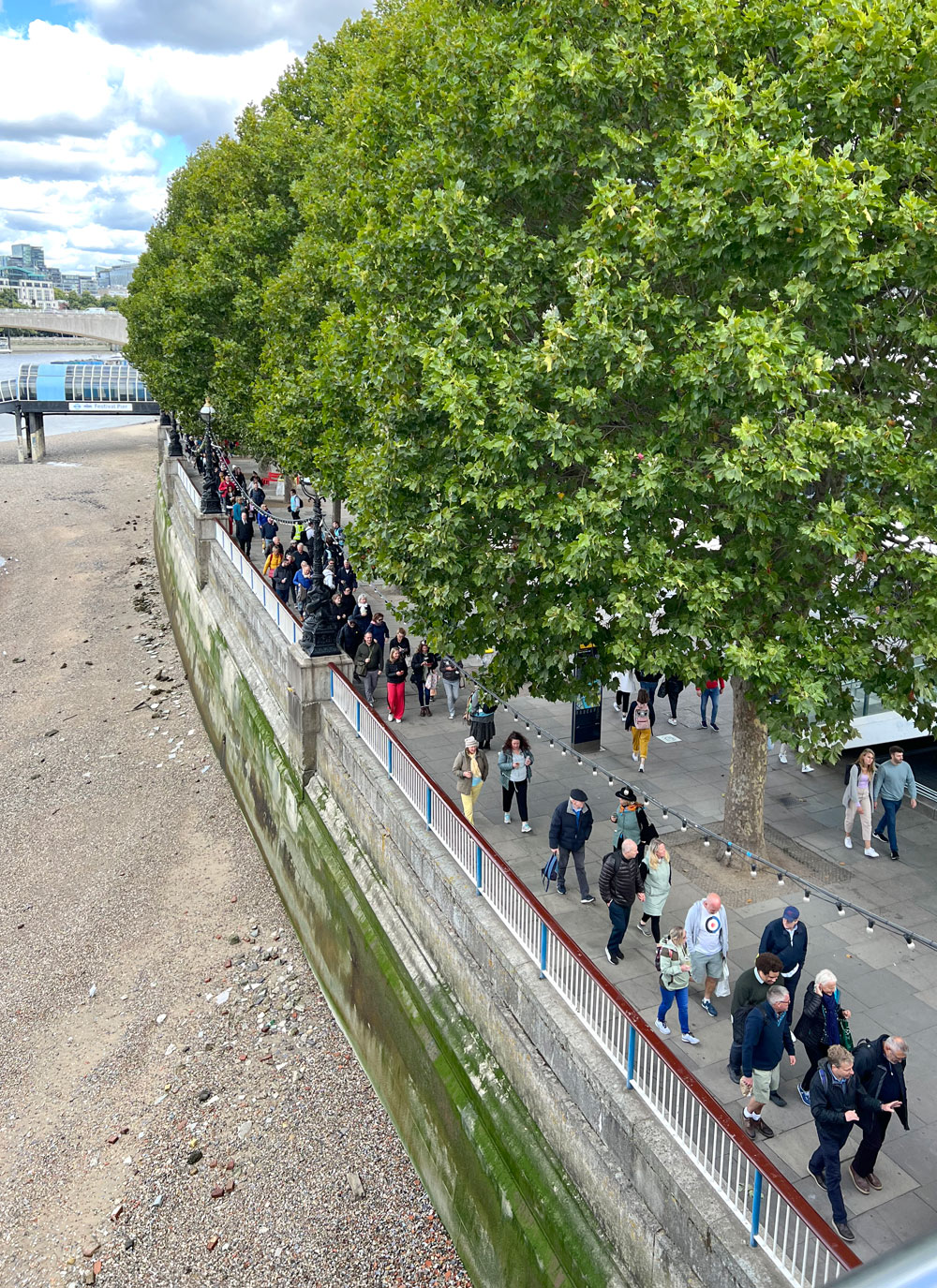 We also had the chance to take the kids to the National Gallery, where we saw many beautiful examples of fine art. The scale of some of the original paintings was awe-inspiring alone. I think that going to a fine art gallery is a great way to introduce kids to principles of art appreciation. 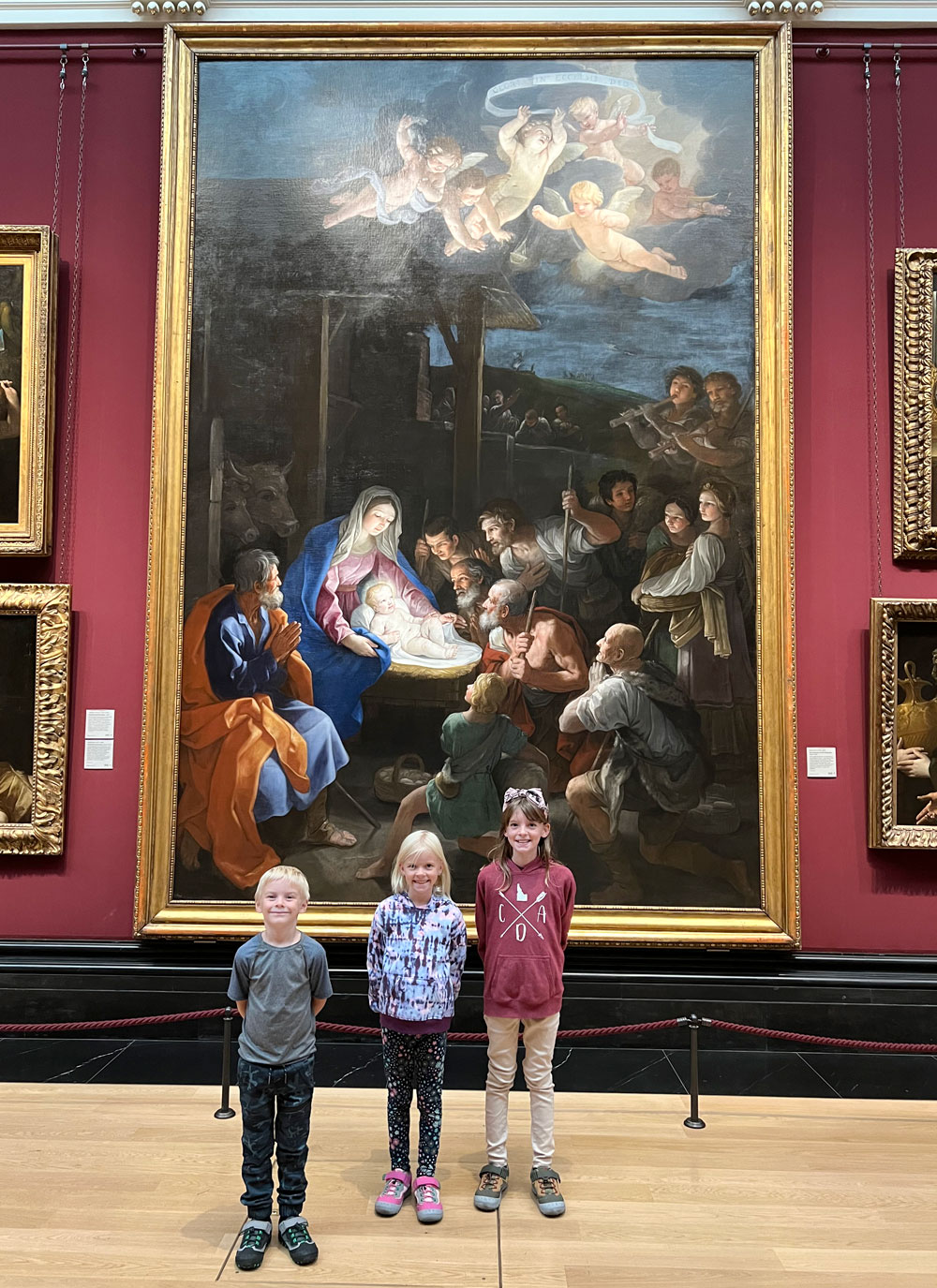 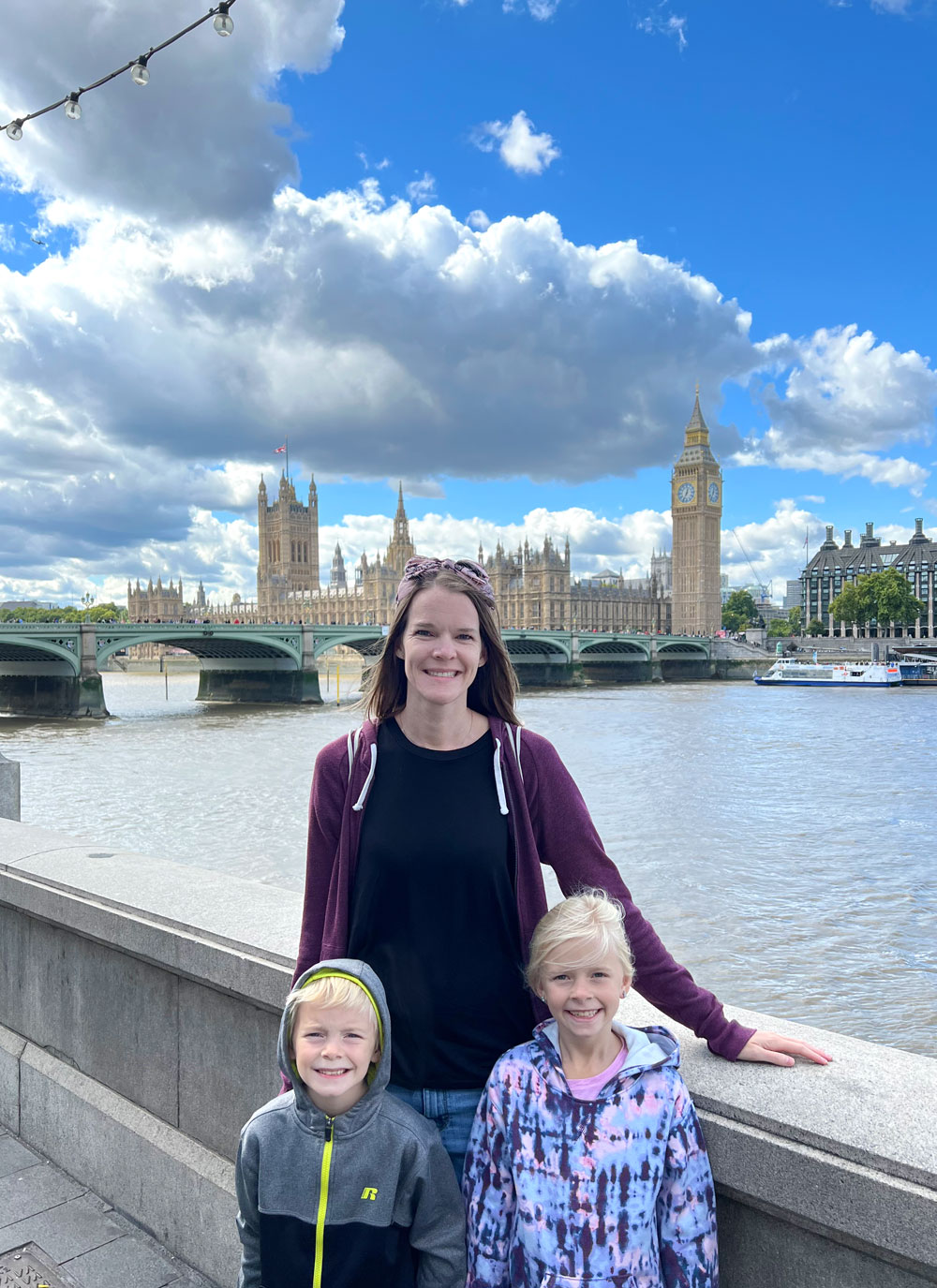 View of Westminster Abbey from across the River Thames. 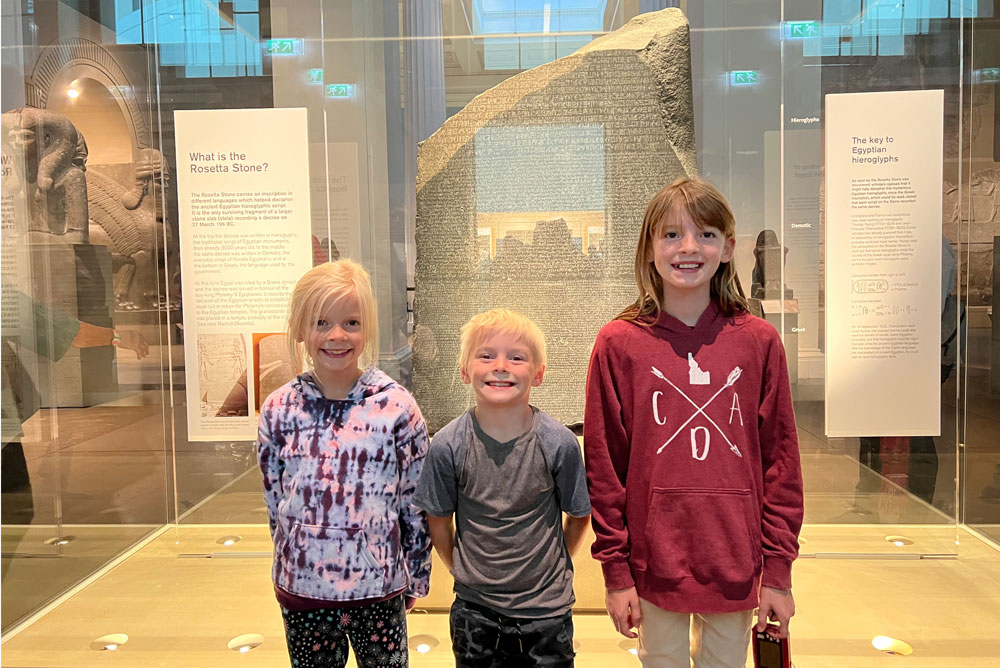 Additionally, we went on a field trip to the British Museum, where we saw the Rosetta Stone and many artifacts from Greek and Egyptian history. We recently read about the Rosetta Stone in the book, The Mystery of History. Our kids learned the discovery of the stone helped archeologists interpret other ancient inscriptions on Egyptian artifacts. 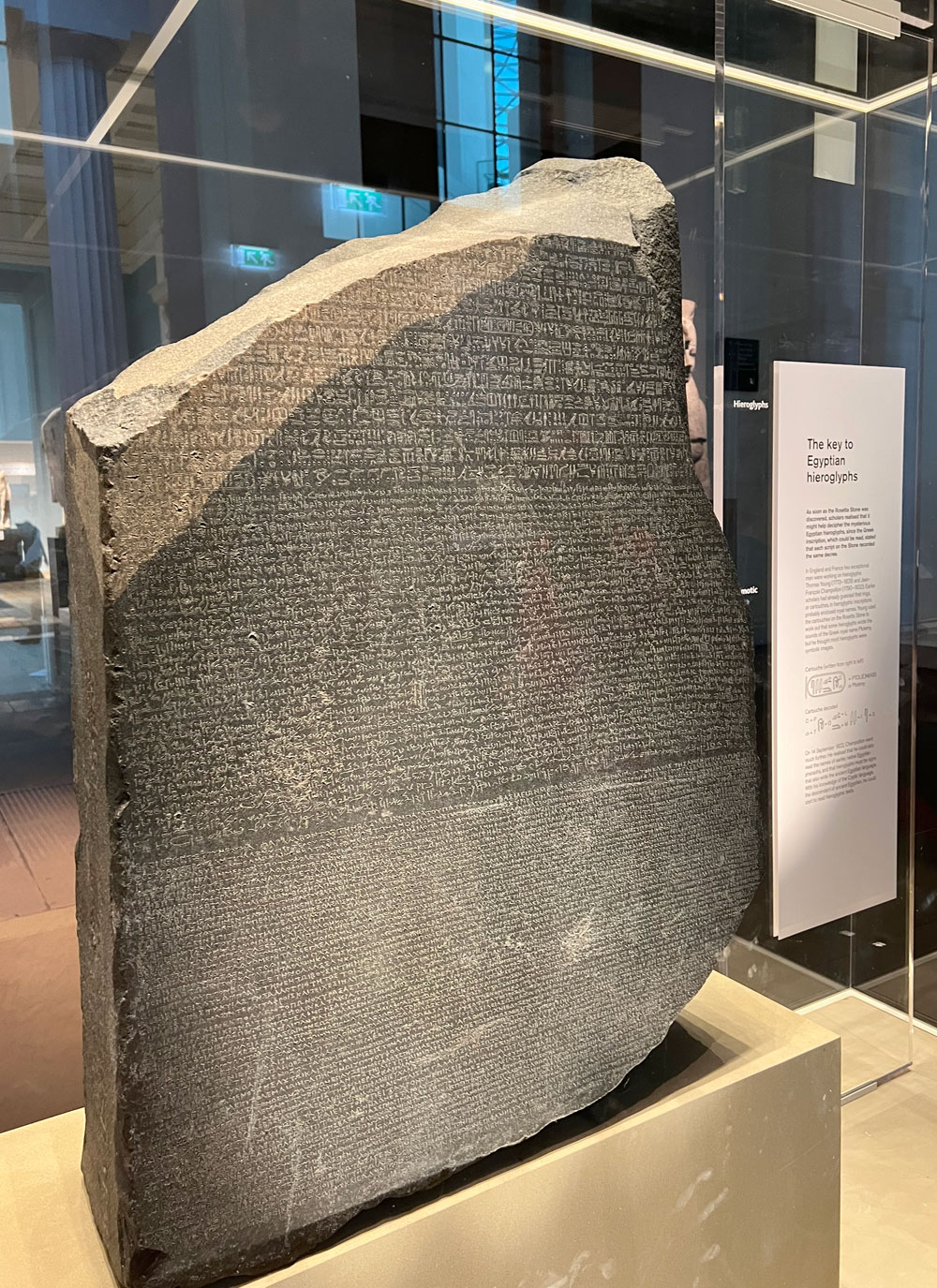 London is a great place to learn more about history and soak up English culture. A downtown park is decorated with this statue of William Shakespeare, a nod to classic theater. 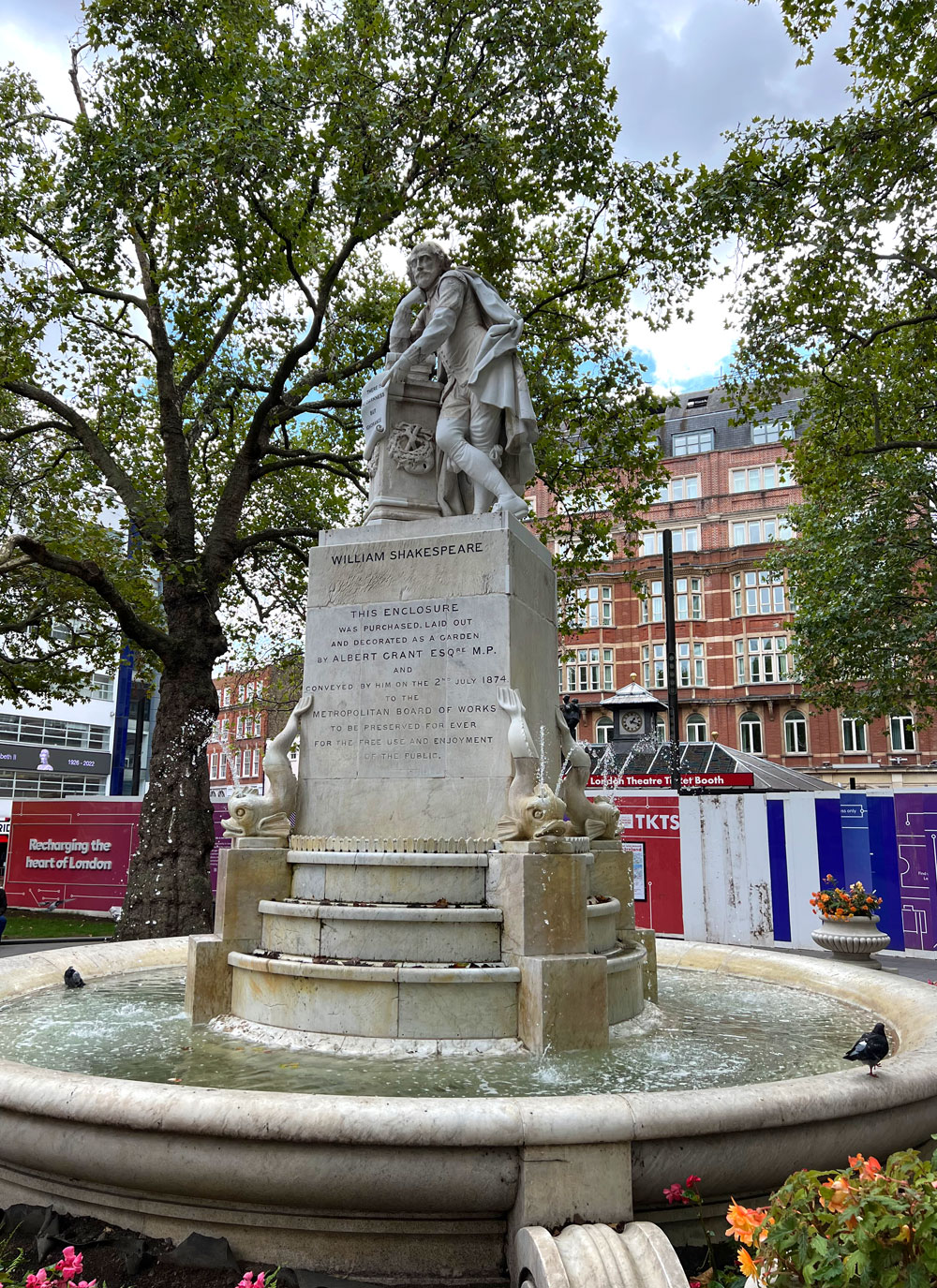 We discovered many options for local transportation during our stay in London. We took the trains, called a taxi on two occasions, and even rode in a double decker bus. The double decker bus offered the best view of the streets of London. 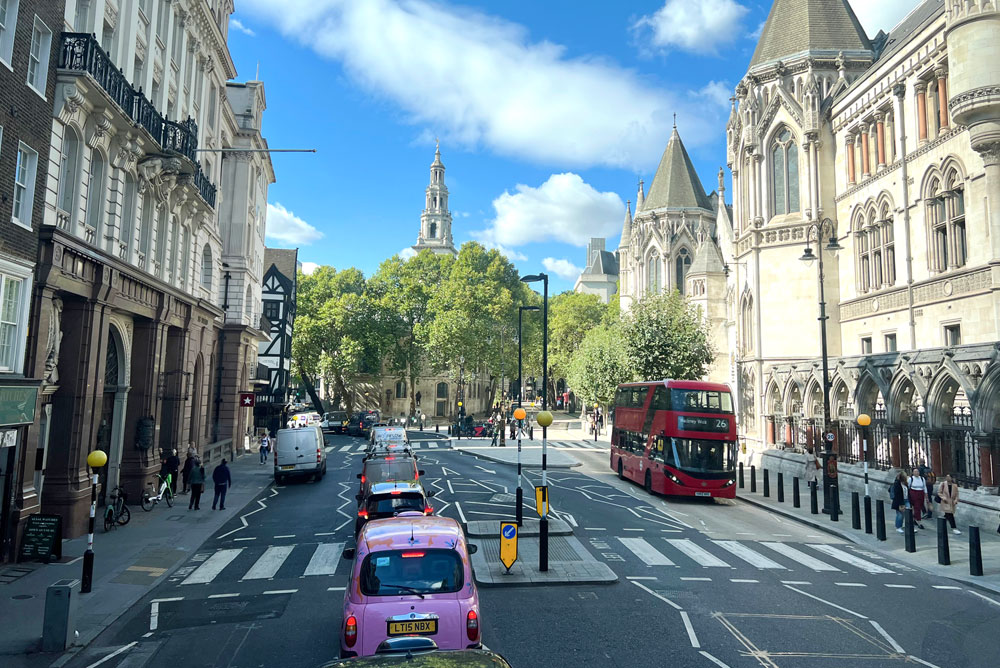 Our family had a memorable experience in London. It was lovely to see the beautiful architecture of Westminster Abbey and Westminster Hall, visit the gates of Buckingham Palace, and visit the National Gallery and British Museum. Furthermore, it was very special to see the memorials for Queen Elizabeth II, as the British people honored the passing of their long-ruling monarch. I hope our visit to London, England is an experience our family won’t soon forget. 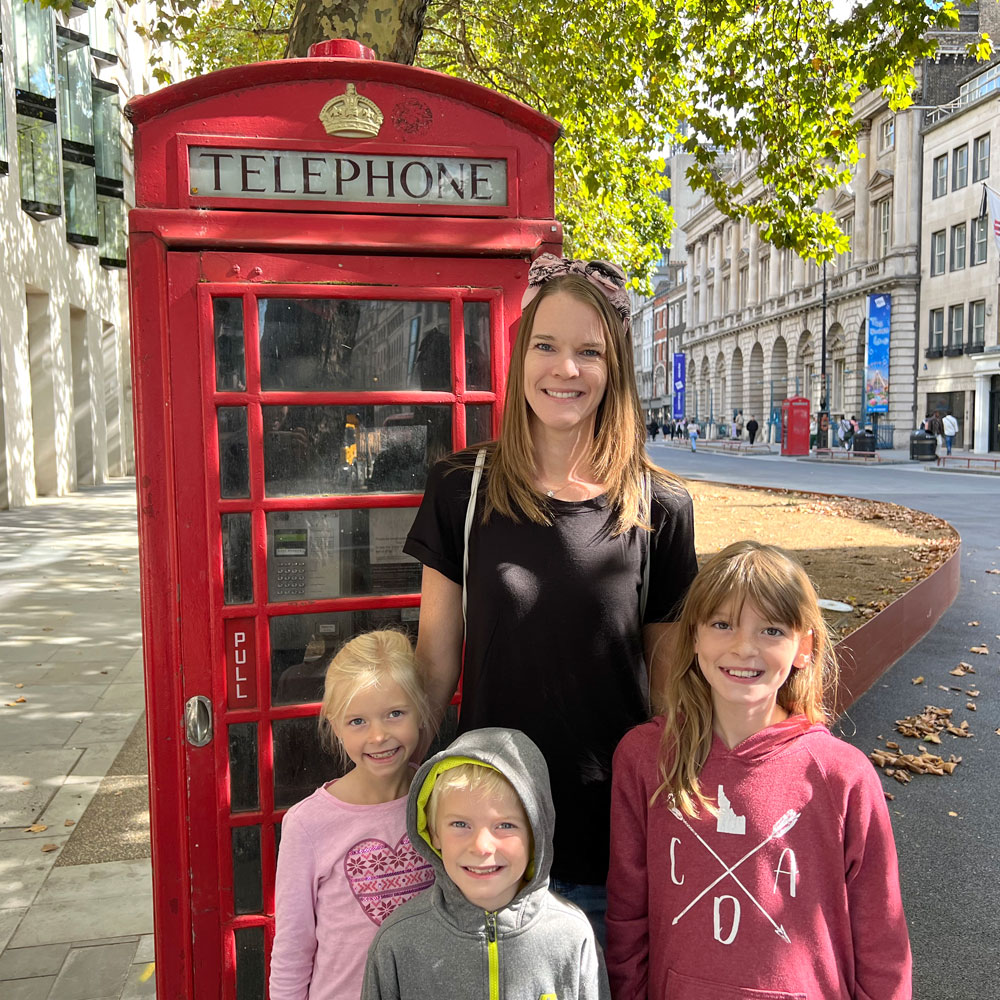 Hi, I’m Katie! I live with my husband and 3 kids in beautiful Coeur d’Alane, Idaho. I love Jesus, coffee, DIY projects, photography, homeschooling my kids, traveling, and serving people. I’ve previously worked as a graphic designer, web designer, journalist and barista. I started Create. Play. Travel. to share some of our creative projects and family adventures. I hope you enjoy the highlights of our creative family life! 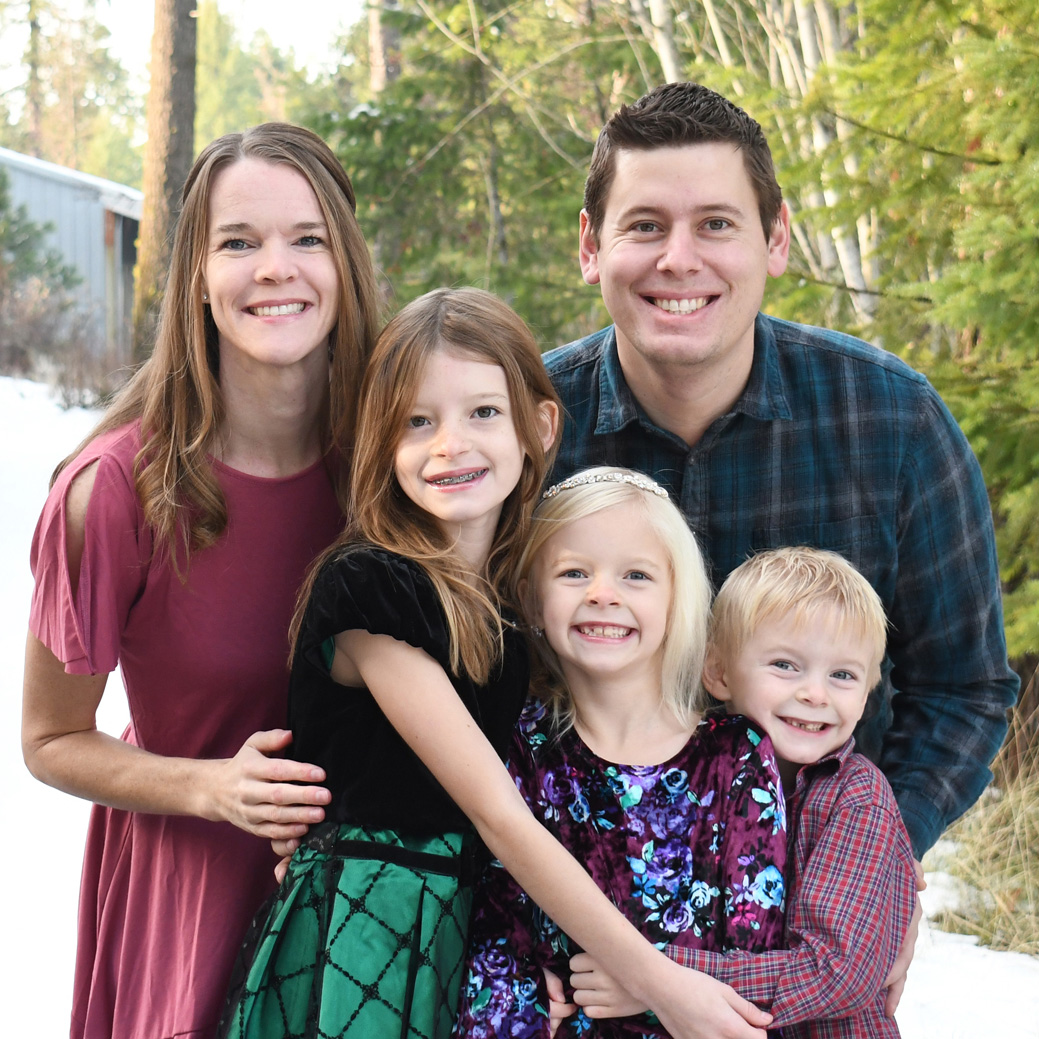 Hello! I'm Katie Wallace. I love coffee, photography and creative projects. I live with my husband and 3 kids in Coeur d'Alene, Idaho. I hope you enjoy our creative activities, DIY ideas, and family travel adventures. Thanks for stopping by! More » 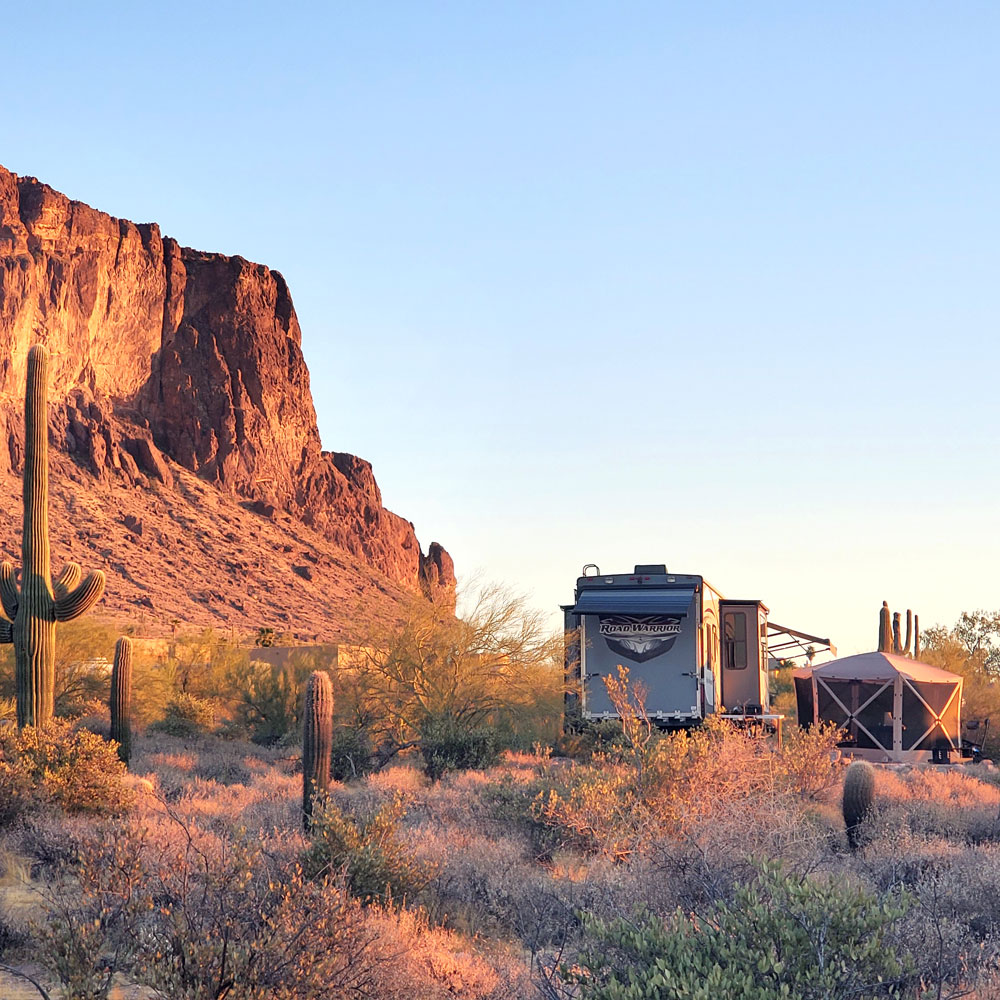 Follow us on our family adventures! We went on a three month RV trip to Arizona in 2021. We also love making memories with our kids in the Pacific Northwest. 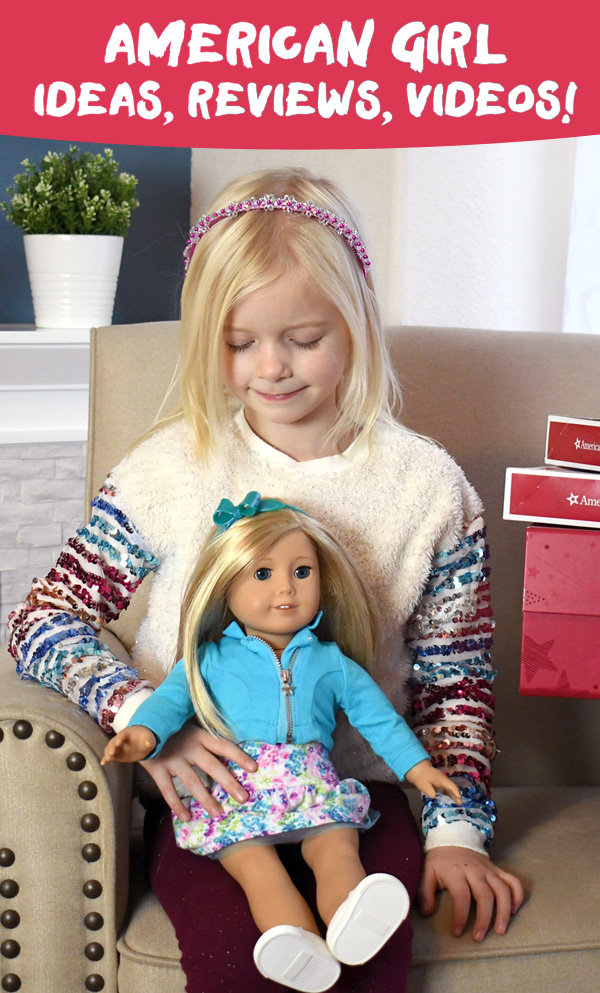 I collected keychains on our Europe trip to make C

Can you believe it's only 20 days until Christmas?

Pic from one of our last hikes before the weather

November is a good time to be thankful for the lit